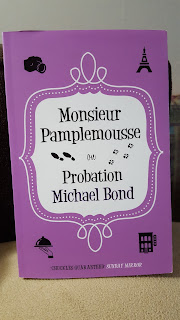 Monsieur Pamplemousse on Probation is one in a series of mystery comic novels by Michael Bond. The Husband gave me several of these for Christmas, knowing how much I enjoy them. This one is the 12th and was published in 2000. It takes place over Valentine's Day, though that's incidental and not a key element. I enjoyed a passing reference to Django Reinhardt's Douce Ambience, which you can listen to here:

He'd grown up with the music of the Quintet of the Hot Club of France, and the music you grew up with stayed with you for the rest of your life, dating you as surely as any birth certificate. It was a sadness that he'd never had the chance to share his pleasure with Doucette [his wife]. In 1953, at the ridiculously early age of forty-three, Reinhardt had died of a stroke.

These can be read in any order.


The esteemed creator of Paddington Bear
devises another delicious escapade for
Monsieur Pamplemousse and Pommes Frites
Monsieur Pamplemousse finds himself in deep water when an unfortunate collision with a Mother Superior is caught on camera by the French tabloids. To avoid media attention, he is sent to report on chef Andre Dulac, currently in line for Le Guide's top award of the Golden Stock Pot Lid.

But Pamplemousse's stay at the Hotel Dulac is far from uneventful. His encounters with mysterious bloodstains, a strangely vibrating girl and a secret family legacy open a can of worms which threatens the very sanctity of France's prmier gastronomic bible...


How did the old saying go? "When one door shuts another opens." Part of the fun in life was not knowing where the next one would lead to.

I have also read the following others from this series: