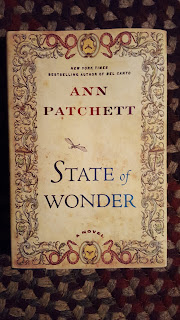 State of Wonder is a 2011 novel by Ann Patchett, one of those authors who doesn't disappoint. This is another I can recommend without any reservation.

Ann Patchett has dazzled readers with her award-winning books, including The Magician's Assistant and The New York Times bestselling Bel Canto. Now she raises the bar with State of Wonder, a provocative, ambitious, and thrilling novel set deep in the Amazon jungle.

Dr. Marina Singh, a research scientist with a Minnesota-based pharmaceutical company, is sent to Brazil to track down her former mentor, Dr. Annick Swenson, who seems to have all but disappeared in the Amazon while working on what is destined to be an extremely valuable new drug. Nothing about the arrangement is easy: not only does no one know where Dr. Swenson is, but the last person who was sent to find her, Marina's research partner Anders Eckman, died before he could complete his mission. Plagued by trepidation, Marina embarks on an odyssey into the insect-infested jungle in hopes of finding Dr. Swenson as well as answers to troubling questions about her friend's death, the state of her company's future, and her own past.

Once found, Dr. Swenson, now in her sevenries, is as ruthless and uncompromising as she ever was back in the days of Grand Rounds at Johns Hopkins. With a combination of science and subterfuge, she dominates her research team and the natives she is studying with the force of an imperial ruler. But while she is as threatening as anything the jungle has to offer, the greatest sacrifices to be made are the ones Dr. Swenson asks of herself, and will ultimately ask of Marina.

In a narrative replete with poison arrows, devouring snakes, and a neighboring tribe of cannibals, State of Wonder is a world unto itself, where unlily beauty stands beside unimaginable loss. It is a tale that leads the reader into the very heart of darkness, and then shows us what lies on the other side.

The New York Times has a review. The Chicago Tribune concludes, "Part scientific thriller, part engaging personal odyssey, "State of Wonder" is a suspenseful jungle adventure with an unexpected ending and other assorted surprises." NPR has a positive review and an excerpt.

The Guardian calls it "her most mature work to date". Kirkus Reviews calls it a "spellbinder" and closes by saying, "Thrilling, disturbing and moving in equal measures—even better than Patchett’s breakthrough Bel Canto".

This counts towards my TBR book challenge.