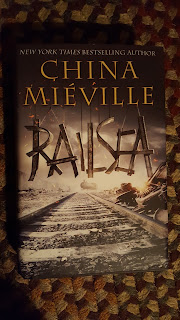 Railsea is a 2012 young adult novel written and with several illustrations by China Mieville. I tend to avoid young adult novels, but this was available used and I like Mieville's writing, so.... I liked this book, as I tend to enjoy Mieville's work, and -though it's not my favorite- I do like it better than Embassytown. I'm hard-pressed to decide why it's labeled a "young adult" book, unless having a young protagonist is enough. I think they should eliminate the "young adult" label entirely. I would think actual "young adults" could just read fiction, for pity's sake.

On board the moletrain Medes, Sham Yes ap Soorap watches in awe as he witnesses his first moldywarpe hunt: the giant mole bursting from the earth, the harpoonists targeting their prey, the battle resulting in one's death and the other's glory. But no matter how spectacular it is, Sham can't shake the sense that there is more to life than traveling the endless rails of the railsea -even if his captain can think only of the hunt for the ivory-colored mole she's been chasing since it took her arm all those years ago. When they come across a wrecked train, at first it's a welcome distraction. But what Sham finds in the derelict -a kind of treasure map indicating a mythical place untouched by iron rails- leads to considerably more than he'd bargained for. Soon he's hunted on all sides, by pirates, trainsfolk, monsters, & salvage-scrabblers. & it might not be just Sham's life that's about to change. It could be the whole of the railsea.

Here is a novel for readers of all ages, a gripping & brilliantly imagined take on Herman Melville's Moby-Dick that confirms China Mieville's status as "the most original & talented voice to appear in several years" (Science Fiction Chronicle)

NPR has a positive review. The Guardian says, "the book's chief glory is its prose." Kirkus Reviews calls it "Another astonishing blend of cyberpunk, steampunk, fantasy and science fiction, from the hugely talented author".

SF Site concludes a mixed review with this: "He has, in short, done everything with this novel. Item by item, he hasn't done any of it particularly badly; but there's too much to allow it all to be done particularly well." io9 describes it as "quite literary but playful".

This counts towards my TBR book challenge.
Posted by Divers and Sundry at 4:00 AM