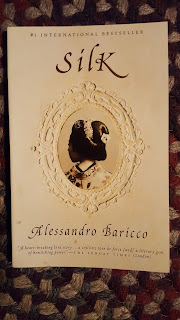 Silk by Alessandro Baricco is an Italian novel. I read the 1997 English translation. I picked this up on a whim and enjoyed it. I can heartily recommend it to anyone who likes fiction because at only 91 pages how can you go wrong. It's such an interesting story. And tragic in its way.

It has been adapted for film, but I've not seen it.

This startling, sensual, hypnotically compelling novel tells a story of adventure, sexual enthrallment, and a love so powerful that it unhinges a man's life. The year is 1861. Herve Joncour is a French merchant of silkworms, who combs the known world for their gemlike eggs. Then circumstances compel him to travel farther, beyond the edge of the known to a country that is legendary for the quality of its silk and its implacable hostility to foreigners: Japan.

NPR says, "It is a particular triumph to pull off writing the truest love story of them all, as Baricco has done". Medieval Bookworm concludes, "For such a short book, this one packs in a lot. It can be read and carefully considered in the space of an afternoon. I’d recommend it for those looking for a thoughtful but emotionally impacting read." Kirkus Reviews calls it "Masterly."
Posted by Divers and Sundry at 4:00 AM