A Spot of Bother 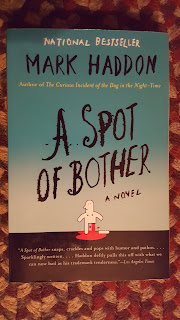 A Spot of Bother is the second novel for adults by Mark Haddon, whose first was The Curious Incident of the Dog in the Night-Time. I bought this book because I liked that first one so much, and I was not disappointed.


A Spot of Bother is Mark Haddon's unforgettable follow-up to the internationally beloved bestseller The Curious Incident of the Dog in the Night-Time.

At sixty-one, George Hall is settling down to a comfortable retirement. When his tempestuous daughter, Katie, announces that she is getting married to the deeply inappropriate Ray, the Hall family is thrown into a tizzy. Unnoticed in the uproar, George discovers a sinister lesion on his hip and quietly begins to lose his mind.

As parents and children fall apart and come together, Haddon paints a disturbing yet amusing portrait of a dignified man trying to go insane politely.

A couple of quotes that struck me:

His own preferred exits were rapid and decisive. Others might want time to bury the hatchet with estranged children and tell their wives where the stopcock was. Personally, he wanted the lights to go out with no warning and the minimum attendant mess. Dying was bad enough without having to make it easier for everyone else.

What they failed to teach you at school was that the whole business of being human just got messier and more complicated as you got older.

You could tell the truth, be polite, take everyone's feelings into consideration and still have to deal with other people's shit. At nine or ninety.

The NYT says the book "serves as a fine example of why novels exist." The Independent says, "Haddon has filled 390 pages with sharp and witty observations about family and daily life." Kirkus Reviews says, "Haddon is a clever writer with an eye and ear for the absurdities of everyday life," but doesn't like this book, thinking it "too slight" and shallow.
Posted by Divers and Sundry at 4:00 AM