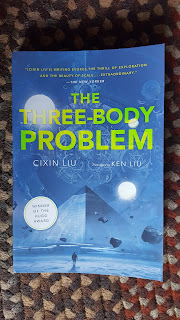 The Three-Body Problem is a 2008 science fiction novel by Cixin Liu. Written in Chinese, it was translated into English by Ken Liu. It is the first book in a trilogy. I found it slow going while reading, but now that I'm done I find myself continuing to think about it and looking forward to the next book. It won the 2015 Hugo.

With The Three-Body Problem, English-speaking readers got their first chance to experience the multiple-award-winning and bestselling Three-Body Trilogy by China's most beloved science fiction author, Cixin Liu. Now the opening volume of the series is available in paperback for the first time. Set against the backdrop of China's Cultural Revolution, a secret military project sends signals into space to establish contact with aliens. An alien civilization on the brink of destruction captures the signal and plans to invade Earth. Meanwhile, on Earth, different camps start forming, planning to either welcome the superior beings and help them take over a world seen as corrupt, or to fight against the invasion. The result is a science fiction masterpiece of enormous scope and vision.


The NYT has a positive review. NPR praises it concluding, "as a science-fiction epic of the most profound kind, it's already won." The Wall Street Journal concludes: "Not a page-turner, but packed with a sense of wonder, coupled to human experiences few of us have had to face."

The main reason The Three-Body Problem is noteworthy is that it’s for the most part a compelling piece of work, brilliantly translated by Ken Liu, whose astonishing con­trol of tone lets us experience the novel as a speculative thriller without losing the sense of Chinese language and culture that makes it uniquely different from the familiar rhythms of Western SF.

SF Reviews closes with this: "The Three-Body Problem aims high and then higher, which ought to be the goal of science fiction generally. While its breathtaking vision is occasionally tripped up by shortcomings in storytelling, it remains a true achievement by an important writer on the global SF scene." Eyrie has a mixed review. Strange Horizons says, "The science is very convincing and up to date, but as a science fiction novel The Three-Body Problem feels like something written in the days of Asimov and Clarke. Devotees of hard science fiction will find a lot to like".