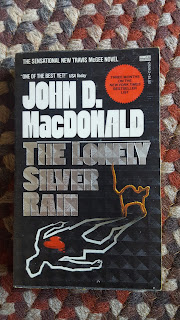 The Lonely Silver Rain is a Travis McGee novel, the 21st and final of the series by John D. MacDonald. It was written a year before the author's death at 70 years of age in 1986. He suffered complications from an earlier heart bypass operation.

The Travis McGee character isn't a traditional detective but lives on a houseboat in Florida and works as a freelance "salvage consultant", locating lost property for a fee of 50% of the value of the item. He pays his own expenses.

Smart, honest, tough, but very tender, John D. MacDonald's famous fictional hero Travis McGee is a fearless adventurer, an intrepid investigator, a champion of underdogs, a rescuer of ladies in distress, and a contemporary philosopher extraordinaire.

Keeping himself alive is something McGee has always taken for granted -until his search for a wealthy friend's missing yacht places him square in the center of the international cocaine trade. As he follows a scorching white line from Miami's penthouse suites to a tiny village in Mexico's Yukatan Peninsula, Travis finds himself the target of some of the most ruthless villains he's ever met.

Pressed into contemplating for the first time his own mortality and jolted into taking stock of his life, Travis McGee discovers amid all the danger the astonishing surprise behind the cat-shaped pipe cleaners someone is leaving at his door. This is vintage McGee in a novel that confirms John D. MacDonald's reputation as one of the greatest storytellers of all time.

I've also read the first in the series The Deep Blue Good-bye. It came out in 1964 and is dated in how it represents women. He grew in his depiction of women in the intervening years, and I look forward to checking into some of the other books in this series.
Posted by Divers and Sundry at 4:00 AM