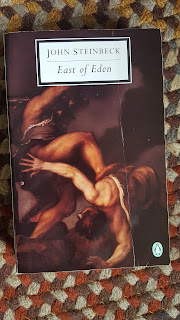 East of Eden is a 1952 John Steinbeck novel, a multi-generation saga tracking the connections between two families. Steinbeck considered this his magnum opus. Back in 2003 it was chosen for Oprah's book club (where it's described as "Three generations, two love triangles, one timeless story. East of Eden is an epic novel full of good and evil, love and hatred, failure and redemption"), and I meant to read it then but never did. Better late than never. This is a powerful novel I really should have read earlier in life. High school, maybe, or college at the latest.


This masterpiece of Steinbeck's later years -a powerful and
vastly ambitious novel that is at once a family saga and a
modern retelling of the Book of Genesis.
In his journal, John Steinbeck called East of Eden "the first book," and indeed it has the primordial power and simplicity of myth. Set in the rich farmland of California's Salinas Valley, this sprawling and often brutal novel follows the intertwined destinies of two families -the Trasks and the Hamiltons- whose generations helplessly reenact the fall of Adam and Eve and the poisonous rivalry of Cain and Abel. Here is the work in which Steinbeck created his most mesmerizing characters and explored his most enduring themes: the mystery of identity; the inexplicability of love, and the murderopus consequences of love's absence.

Biography.com has an article on how Steinbeck's life led up to the writing of this book:


East of Eden is an experimental book that captures Steinbeck’s wide vocal reach: his sturdy love of place; his fascination with the fictive process; his retelling of family stories; and his willingness to grapple with the full range of human experience—at its lowest ebb and swelling to startling acts of clarity and compassion.

The Yale Review of Books discusses its choice as an Oprah book club selection. Kirkus Reviews opens by calling it "Tremendous in scope- tremendous in depth of penetration".
Posted by Divers and Sundry at 4:00 AM