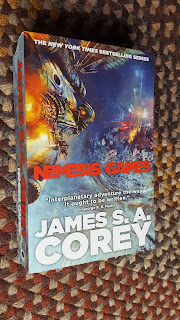 Nemesis Games is book 5 in the Expanse series, a science fiction space opera written by James S. A. Corey. The author's name is the pen name of the team of Daniel Abraham and Ty Franck. These books have all been fun, enjoyable reads. The series is being adapted for television as The Expanse. I've seen season one and can't express how pleased I am with how it's been done.


Catching Fire
A thousand worlds have opened, and the greatest landrush in human history has begun. As wave after wave of colonists leave, the power structures of the old solar system begin to buckle.

Ships are disappearing without a trace. Private armies are being secretly formed. Terrorist attacks previously considered impossible bring the inner planets to their knees. The sins of the past are returning to exact a terrible price.

And as a new human order is born in blood and fire, James Holden and the crew of the Rocinante must struggle to survive and get back to the only home they have left.

io9 calls it "Corey’s Empire Strikes Back." SFF World says, "the powerful storytelling and engaging characterization from previous volumes are shining through as The Expanse continues to reshuffle the deck with each installment." Publishers Weekly concludes, "With enough thrills and intrigue for three Hollywood blockbusters, the novel stands alone nicely, making it easy for new readers as well as diehard series fans to dive right in."