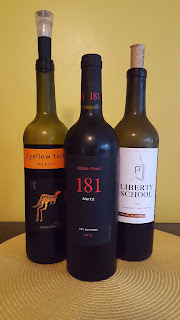 The decade-long campaign to enable grocery stores in Tennessee to stock wine has ended with a victory for consumers. In the same way that Easy Way produce shops aren't irreparably damaged by grocery stores being able to stock fresh produce and specialty bakeries aren't run out of business because grocery stores can sell baked goods and Charlie's Meat Market isn't closing because you can buy steak from the grocery store, liquor stores will find a way to survive customers being able to buy a bottle of wine from the local grocer.

The Tennessean calls it "one of the most significant changes to state liquor laws since the repeal of Prohibition". The Memphis Flyer has the final score:


Grocery stores got to sell wine. Liquor stores got to expand their offerings with beer, light food, mixers, and more —and they got a year to settle into their new situation. State coffers got -or will get— an estimated additional $13 million in tax revenues.

The religious right walked away empty-handed.

Consumers will get added convenience and, perhaps, lower prices on booze across the board."

It's not likely that folks who really know wine and want that specialty vintage bottle will be looking for it in a grocery store. I, on the other hand, am never in a liquor store. The Husband is a teetotaler, and I don't find alcohol such a draw that I'll go to a separate store in a separate shopping center just so I can have wine with supper. Since it's now available in grocery stores, I've been picking up wine and having some with my evening meal.

Researching the best buys and best wines available on the Kroger wine aisle is actually fun. The Yellow Tail Merlot bottle on the left in the photo at the top of the post was something The Younger Son brought home one day on the strength of the label alone. I don't care for it, and it's languishing in the back of the fridge. The bottle in the middle -the 181 Merlot- we bought on the recommendation of The Elder Son. I like that one and have already bought another bottle. The one on the right -Liberty School Cabernet Sauvignon- was one I saw suggested in my online research. It's also good, and I'll gladly buy more of it. I'm planning to look for Ravenswood Zinfandel on my next trip. I haven't bought any of the white wines yet, but I will. I'll probably make Geyser Peak Sauvignon Blanc my first pick.

Vine Pair has a list of 15 "great supermarket wines for under $15" that I'll be choosing from. The list of 150 best wines under $15 from FoodAndWine.com -150!- has separate lists for reds, whites and rosés, but they have a more manageable list of 25 that looks less intimidating to me.

The Wall Street Journal has a kind of tutorial on how to make a selection off the shelf and includes some specific suggestions including the following:
Serious Eats has a Hall of Fame of best wines under $20.

I don't drink much at a time (about 2 oz), so a bottle lasts a while. I do look forward to trying new kinds of wine.
Posted by Divers and Sundry at 4:00 AM