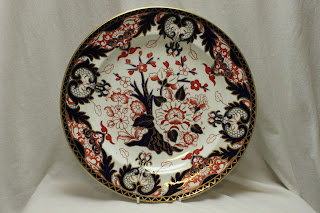 The Crown Derby Plate is a horror short story by Marjorie Bowen. It was first published on Christmas Eve in 1931 and takes place during the Christmas season. I find it delightful, featuring as it does three cheerful old women sitting at a big cozy fire and wondering about the rumor of a ghost. You can read it online here. You can have it read aloud to you at the bottom of this post. It begins,


Martha Pym said that she had never seen a ghost and that she would very much like to do so, “particularly at Christmas, for you can laugh as you like, that is the correct time to see a ghost.”

“I don’t suppose you ever will,” replied her cousin Mabel comfortably, while her cousin Clara shuddered and said that she hoped they would change the subject for she disliked even to think of such things.

The three elderly, cheerful women sat round a big fire, cosy and content after a day of pleasant activities; Martha was the guest of the other two, who owned the handsome, convenient country house; she always came to spend her Christmas with the Wyntons and found the leisurely country life delightful after the bustling round of London, for Martha managed an antique shop of the better sort and worked extremely hard. She was, however, still full of zest for work or pleasure, though sixty years old, and looked backwards and forwards to a succession of delightful days.

The other two, Mabel and Clara, led quieter but none the less agreeable lives; they had more money and fewer interests, but nevertheless enjoyed themselves very well.

“Talking of ghosts,” said Mabel, “I wonder how that old woman at ‘Hartleys’ is getting on, for ‘Hartleys,’ you know, is supposed to be haunted.”