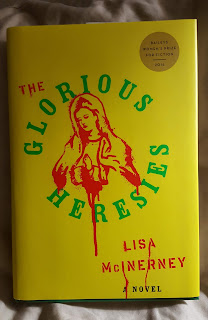 The Glorious Heresies is a 2015 debut novel by Lisa McInerney and won both the Baileys Women's Prize for Fiction and the Desmond Elliott Prize. Reading about these people living at the bottom in hard times could be too bleak to bear, but the writer has a way with words that turns these sad cases into real people. A TV miniseries is planned.


From Lisa McInerney, hailed by The Irish Times as "arguably the most talented writer at work in Ireland today," comes The Glorious Heresies, a searing debut novel about life on the fringes of Ireland's post-crash society.

When grandmother Maureen Phelan is surprised in her home by a stranger, she clubs the intruder with a Holy Stone. The consequences of this unplanned murder connect four misfits struggling against their meager circumstances. Ryan is a fifteen-year-old drug dealer desperate not to turn out like his alcoholic father, Tony, whose feud with his next-door neighbor threatens to ruin his family. Georgie is a sex-worker who half-heartedly joins a born-again movement to escape her profession and drug habit. And Jimmy Phelan, the most fearsome gangster in the city and Maureen's estranged son, finds that is mother's bizarre attempts at redemption threaten his entire organization.

Biting and darkly funny, The Glorious Heresies presents an unforgettable vision of a city plagued by poverty and exploitation, where salvation still awaits in the most unexpected places.

The quotes that jumped out at me:


who can forgive what they haven't already judged?

She was well aware that she lived in the past but, she decided, it was because she'd been left there.

*******
The New York Times has a positive description. The Telegraph calls it "powerful" and concludes, "There must be some hope yet, though, for a country that can still produce writing as powerful as this." The Guardian closes by calling it "an irrepressible volley of unrehearsed words from a brand new throat."

The Irish Times opens its review with this: "Biting, moving and darkly funny, The Glorious Heresies explores salvation, shame and the legacy of Ireland’s twentieth-century attitudes to sex and family". Kirkus Reviews concludes by saying, "This is a colorful, ambitious first outing that recalls Dylan Thomas’ comment on Flann O’Brien’s At Swim-Two-Birds: “Just the book to give your sister, if she is a dirty, boozey girl.”"
Posted by Divers and Sundry at 4:00 AM