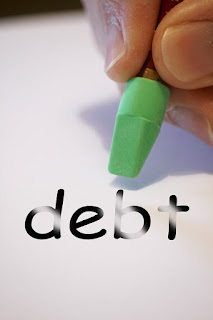 Back in the far distant times, we had debt. We've had credit card debt, car loans, a mortgage, etc. Years ago we decided that debt was dangerous, put us at the mercy of others in a way that we didn't like, and prevented us from saving. And the interest! It's hard to buy things and then pay more in interest than the item originally cost.

I discovered Dave Ramsey on the radio back in the early 1990s and found it supportive and helpful. He had an organized plan, and I bought a book and adapted his suggestions for our situation. At his website, he has instructions on getting out of debt using the "debt snowball" where you take the smallest debt and devote available resources to it until it's paid off. Then you devote those resources to paying off the next debt.

There are other Get-Out-Of-Debt programs, but sometimes it feels like those programs are actually selling something rather than providing help. Resources that give specific instructions without hyping low-interest credit cards are better. ListenMoneyMatters.com has articles on How to Destroy Your Debt. Time.com has it boiled down to 3 simple steps and offers reviews of the best books on the subject. The Art of Simple website connects living debt-free with living simply. The first two steps at The Balance are reflecting on how you got into debt and changing your spending habits.

It seems to me it doesn't much matter which system you use as long as you devote attention to it and commit to not borrowing more. I will say I'm talking reasonable levels of debt here. I can't imagine what it must be like to have the kind of medical debt some people have, for example.

Once out of debt, we were able to save up to replace our current cars. That's a glorious feeling, I'm telling you, to be able to write a check for a car. Not having those big monthly payments for cars and mortgage makes it so we can live more easily on less income. During this period of reduced income with no certainty it'll ever increase, it's such a comfort to not be burdened with debt.
Posted by Divers and Sundry at 4:00 AM