The Long Way to a Small, Angry Planet 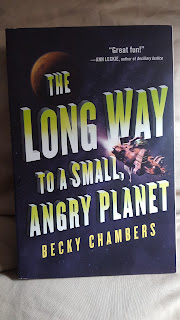 The Long Way to a Small, Angry Planet is a 2014 science fiction book, the debut novel of Becky Chambers. I enjoy space opera, and this is a good one. The world-building is believable, and the characters are fully-formed and sympathetic.


There were few things Dr. Chef enjoyed more than a cup of tea. He made tea for the crew every day at breakfast time, of course, but that involved an impersonal heap of leaves dumped into a clunky dispenser. A solitary cup of tea required more care, a blend carefully chosen to match his day. He found the ritual of it quite calming: heating the water, measuring the crisp leaves and curls of dried fruit into the tiny basket, gently brushing the excess away with his fingerpads, watching color rise through water like smoke as it brewed. Tea was a moody drink.

There had been no tea on his home planet.


When Rosemary Harper joins the crew of the Wayfarer, she isn't expecting much. The patched-up ship has seen better days, but it offers her everything she could possibly want: a spot to call home, a chance to explore the far-off corners of the galaxy and some distance from her past. And nothing could be further from what she's known than the crew of the Wayfarer.

From Sissix, the exotic reptilian pilot, to Kizzy and Jenks, the chaty engineers who keep the ship running, to the noble captain Ashby, life aboard is chaotic and crazy -exactly what Rosemary wants. That is, until the crew is offered the job of a lifetime: tunneling wormholes through space to a distant planet. Sure, they'll earn enough money to live comfortably for years, but risking her life wasn't part of the job description.

The journey through the galaxy is full of excitement, adventure and mishaps for the Wayfarer team. And along the way, Rosemary comes to realize that a crew is a family, and that family isn't necessarily the worst thing in the universe... as long as you actually like them.


The truth is, Rosemary, that you are capable of anything. Good or bad. You always have been, and you always will be. Given the right push, you, too, could do horrible things. That darkness exists within all of us. You think every soldier who picked up a cutter gun was a bad person? No. She was just doing what the soldier next to her was doing, who was doing what the soldier next to her was doing, and so on and so on. And I bet most of them -not all, but most- who made it through the war spent a long time after trying to understand what they'd done. Wondering how they ever could have done it in the first place. Wondering when killing became so comfortable.
...

All you can do, Rosemary -all any of us can do- is work to be something positive instead. That is a choice that every sapient must make every day of their life. The universe is what we make of it. It's up to you to decide what part you will play.

The Guardian calls it "a quietly profound, humane tour de force that tackles politics and gender issues with refreshing optimism." The Financial Times describes it as "a feel-good tale of non-conformity, gender fluidity, multiculturalism and unorthodox sexual relationships."

LocusMag says, "It’s like settling into a nice warm bath on a cold wet day, sort of like a cozy mystery, but with aliens and wormholes." io9 opens by calling it "probably the most fun that you’ll have with a space opera novel this year. It’s exciting, adventurous, and the cozy sort of space opera that seems to be in short supply lately." Tor says it's a "progressive piece de resistance" and "a delight".

Strange Horizons opens with this: "This wonderfully imaginative and quirky novel focuses on the crew of a small working spaceship, the Wayfarer, and their everyday life, relationships, incidents, and conflicts."
Posted by Divers and Sundry at 4:00 AM