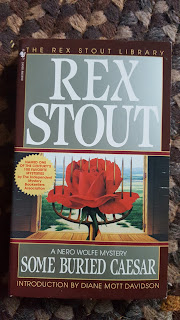 Some Buried Caesar is the sixth in the series of Nero Wolfe books by Rex Stout, first published in book form in 1939. Lily Rowan, Archie Goodwin's long-time love interest, is introduced early in this book. It's on the list of 100 Favorite Mysteries of the Century by the Independent Mystery Booksellers Association. I'm working my way through the books in this series that The Younger Son owns. They are fun, easy reads.

This one is a rare example of Nero Wolfe venturing outside his home city and solving a case that comes up there. He has gone to a large exhibition (a regional fair-type environment) to enter his orchids in competition. I got a kick out of the many scenes that take place in the Methodist food tent. Wolfe knows who has the best cooking available.


An automobile breakdown strands Nero Wolfe and Archie in the middle of a private pasture -and a family feud over a prize bull. A restaurateur's plan to buy the stud and barbecue it as a publicity stunt may be in poor taste, but it isn't a crime...
until Hickory Caesar Grindon, the soon-to-be-beefsteak bull, is found pawing the remains of a family scion. Wolfe is sure the idea that Caesar is the murderer is, well, pure bull. Now the great detective is on the horns of a dilemma as a veritable stampede of suspects -including a young ady Archie has his eye on- conceals a special breed of killer who wins a blue ribbon for sheer audacity.