The Drawing of the Three: Dark Tower #2 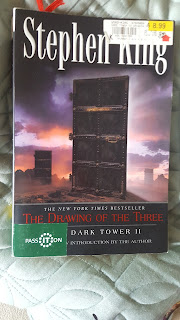 The Drawing of the Three is book 2 in the Dark Tower series by Stephen King. I'm re-reading the first two and reading the rest of the series in preparation for the release of the sequel film. This book is really just an extensive origin story for the gunslinger's companions. If I hadn't known the rest of the series was worth reading I'd have stopped after this one, and in fact it was after this one I gave it up the last time I started this project. Onward, though. Now I am motivated to read til the end.

Stephen King returns to the Dark Tower in this second mesmerizing volume in his epic series. Roland of Gilead has mysteriously stepped through a doorway in time that takes him to 1980s America, where he joins forces with the defiant Eddie Dean and courageous Odetta Holmes. A savage struggle has begun in which underworld evil and otherworldly enemies conspire to bring an end to Roland's desperate search for the Dark Tower. Masterfully weaving dark fantasy and icy realism, The Drawing of the Three compulsively propels readers toward the next chapter.

The Guardian says, "The sequel to The Gunslinger, The Drawing of the Three seems to have been meant for what King referred to as the "Constant Reader" – those who follow his every published word." Kirkus Reviews concludes, "In an afterword, King previews volumes 3 and 4: an epic in the making, and, if the quality of this one sustains, a series to be savored as it grows." SF Site says, "this second book is more of an interlude, a place for Roland to consider his quest and replenish his strength by drawing a new ka-tet (a phrase which appears later in the series, and which means literally "one from many")." SFF Book Review says, "THE VERDICT: Highly recommended! This will get you into the Dark Tower craze and it also happens to be an excellent summer book."