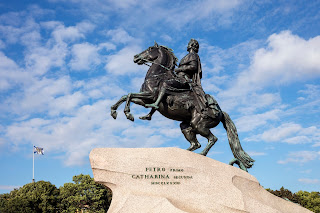 The Bronze Horseman is an 1833 story in verse by Alexander Pushkin. Wikipedia says it is "about the equestrian statue of Peter the Great in Saint Petersburg and the great flood of 1824" and says,


Widely considered to be Pushkin's most successful narrative poem, "The Bronze Horseman" has had a lasting impact on Russian literature. It is considered one of the most influential works in Russian Literature, and is one of the reasons Pushkin is often called the “founder of modern Russian literature.” The statue became known as the Bronze Horseman due to the great influence of the poem.

Pushkin died on February 10, 1837, of peritonitis following a shot in the stomach during a duel.

The poem can be read online here. It begins:

A wave-swept shore, remote, forlorn:
Here stood he, rapt in thought and drawn
To distant prospects. Broad and chartless
The river ran, along it borne
A lonely skiff, rough-hewn and artless.
Darker against the marshy green
Of moss-grown banks appeared some mean
Log huts: the poor Finns’ habitation;
And forests which had never seen
The mist-veiled sun’s illumination
Were live with whispers.

And he thought:
‘From here the Swede is ill-protected:
A city on this site, to thwart
His purposes, shall be erected.
For here we may, by Nature blessed,
Cut through a window to the West
And guard our seaboard with conviction.
At home in waters which had been
Unknown, all flags shall here be seen,
And we shall feast without restriction.’

A hundred years have passed. We see,
Where swamp and forest stood but lately:
The city, northern prodigy,
Has risen, sumptuous and stately;
Where once a humble Finnish lad –
Poor foster-child in Nature’s keeping –
Alone upon the low banks had
Oft cast his time-worn nets when reaping
The waters’ hidden harvest, – now
Great towers and palaces endow
The bustling banks with grace and splendour;
From every corner of the earth
Come vessels, jostling to berth
At these rich wharves. Now, to defend her,
Our city’s banks are granite-cased;
Fair bridges interlace her waters;
And verdant parks bedeck those quarters
With which the islands have been graced.
So our young capital’s aurora
Puts ancient Moscow in the shade,
Just as a new tsaritsa’s aura
Must make the empress-mother fade.

O how I love you, Peter’s daughter!
Your aspect, graceful yet austere;
Nevá’s augustly flowing water
And granite banks: these I hold dear;
Your railings, finely ornamented;
Your pensive nights of moonless light
And lambent dusk, when I, contented,
Sit in my room and read and write
Without a lamp, while in the nearly
Deserted streets huge buildings clearly
Loom up, asleep; and solar fire
Plays on the Admiralty spire;
And Dusk directly (as if plotting
To keep the golden skies alight)
Hands on the torch to Dawn, allotting
A brief half-hour to cheated Night.
I love your winter, harsh and bracing:
The still air resonant with frost;
Girls’ rosy cheeks; and sledges racing
By broad Nevá, now freely crossed;
And ballrooms: noisy, scintillating;
At junketings of single men
The glasses charged and coruscating,
And rum punch, flaming blue again.
I love the military vigour
Paraded on the Field of Mars:
Stout-hearted foot troops and hussars
In orderly and pleasing figure;
Torn battle colours held on high;
Smart ranks in measured rhythm swaying;
Glint of brass helmets, all displaying
Proud bullet scars from wars gone by.
And, martial capital, what pleasure
To hear your fortress cannon roar
When the Tsaritsa adds more treasure –
A son – to the Imperial store;
Or Russia celebrates once more
Defeat of our opponents’ legions;
Or when Nevá’s blue ice fragments,
And she, saluting Spring, sweeps hence
The shattered ice to ocean regions!

O fair Petropolis, stand fast,
Unshakeable as this great nation:
So that the elements, at last
Subdued, may seek conciliation!
And may the Finnish waves now cast
Aside hate born of long subjection,
And not with futile insurrection
Disturb great Peter’s ageless sleep!
There was a dreadful time … still deep
Its imprint on our generation …
My friends, that time, remembered well,
Shall be the theme of my narration.
It is a sombre tale I tell.