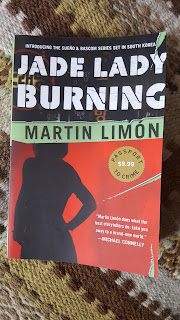 Jade Lady Burning (1992) is the first book in the Sueño and Bascom series by Martin Limon. I liked the setting, but it wasn't filled out very well. The characters were also lacking in depth, and although I think the main character has potential I'm stopping with this first book unless I'm somehow convinced by circumstance to read another one.

Almost twenty years after the end of the Korean War, the US Military is still present throughout South Korea, and tensions run high. Koreans look for any opportunity to hate the soldiers who drink at their bars and carouse with their women. When Pak Ok-suk, a young Korean woman, is found brutally murdered in a torched apartment in the Itaewon red-light district of Seoul, it looks like it might be the work of her American soldier boyfriend. Sergeants George Sueño and Ernie Bascom, Military Police for the US 8th Army, are assigned to the case, but they have nothing to go on other than a tenuous connection to an infamous prostitute. As repressed resentments erupt around them, the pair sets out on an increasingly dangerous quest to find evidence that will exonerate their countryman.

Kirkus Reviews says, "Authentic low-life Korean backgrounds don't entirely compensate for this first novel's predictable plot and flat characters". Publishers Weekly concludes by calling it "A mixed-bag first effort, with an evocative setting and a sluggish pace."
Posted by Divers and Sundry at 4:00 AM