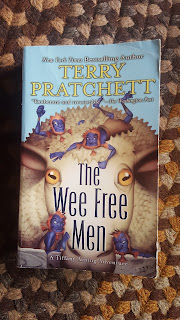 The Wee Free Men is one of the Discworld books by Terry Pratchett, but is readale as a stand-alone novel. It's appropriate for children but also enjoyable for adults, not a common feature in books in my experience.


There's trouble on the Aching farm: monsters in the river, headless horsemen in the lane -and Tiffany Aching's little brother has been stolen by the Queen of Fairies. Getting him back will require all of Tiffany's strength and determination (as well as a sturdy skillet) and the help of the rowdy clan of fightin', stealin', tiny blue-skinned pictsies known as the Wee Free Men!

*******
This picture -The Fairy Feller's Master-Stroke- figures in the plot: 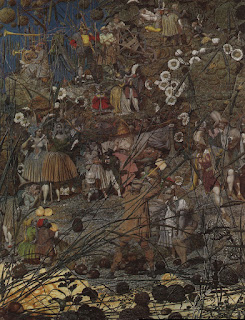 The New York Times says it "is good solid storytelling done in a style that reads like Celtic mythology fused with the girl power of ''Buffy the Vampire Slayer'' with dialogue by Robert Burns." Kirkus Reviews says, "The Carnegie Medal–winner’s fans will not be disappointed."

SF Site concludes with this:

The Wee Free Men is a funny, funny book. It brims with memorable visuals. It's full of all the elements of a life well-lived -a sense of right and wrong (even when reinterpreted by the Wee Free Men), imagination, courage, love, the ability to dream and the ability to know when it's time to stop dreaming and open one's eyes (and then open one's eyes again -once more, read the book and you'll understand). Wholeheartedly recommended for readers of all ages.