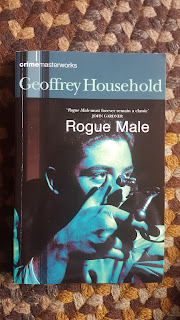 Rogue Male by Geoffrey Household is a 1939 thriller, a classic in the field. This is a quick read, a real page-turner. It has been adapted for film twice, and a new adaptation starring Benedict Cumberbatch is in the works.

Rogue Male is one of the classic thrillers of the 20th century. An Englishman plans to assassinate the dictator of a European country. But he is foiled at the last minute and falls into the hands of ruthless and inventive torturers. They devise for him an ingenious and diplomatic death but, for once, they bungle the job and he escapes. But England provides no safety from his pursuers -and the Rogue Male must strip away all the trappings of status and civilization as the hunter becomes a hunted animal.

The NYRB says, "the book is no less remarkable as an exploration of the lure of violence, the psychology of survivalism, and the call of the wild." The Independent says, "This 1939 novel, a clear precursor of Fleming and Forsyth, is much more than a first-class thriller. As Robert Macfarlane's preface argues, it is a "stone-cold classic"." Kirkus Reviews calls it "Exciting reading".
Posted by Divers and Sundry at 4:00 AM