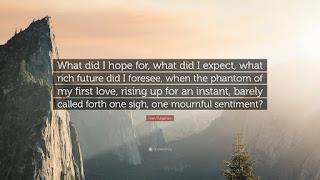 First Love (1860) is a short novel by Ivan Turgenev. The story tells of a 16 year old boy whose love for a 21 year old woman finally ends when he discovers that she is the mistress of his father. It is available online in English translation here and here. It's a tragic story of loss and disappointment.

It begins with this:

The party had long ago broken up. The clock struck half-past twelve. There was left in the room only the master of the house and Sergei Nikolaevitch and Vladimir Petrovitch.

The master of the house rang and ordered the remains of the supper to be cleared away. ‘And so it’s settled,’ he observed, sitting back farther in his easy-chair and lighting a cigar; ‘each of us is to tell the story of his first love. It’s your turn, Sergei Nikolaevitch.’

Sergei Nikolaevitch, a round little man with a plump, light-complexioned face, gazed first at the master of the house, then raised his eyes to the ceiling. ‘I had no first love,’ he said at last; ‘I began with the second.’

‘It’s very simple. I was eighteen when I had my first flirtation with a charming young lady, but I courted her just as though it were nothing new to me; just as I courted others later on. To speak accurately, the first and last time I was in love was with my nurse when I was six years old; but that’s in the remote past. The details of our relations have slipped out of my memory, and even if I remembered them, whom could they interest?’

‘Then how’s it to be?’ began the master of the house. ‘There was nothing much of interest about my first love either; I never fell in love with any one till I met Anna Nikolaevna, now my wife — and everything went as smoothly as possible with us; our parents arranged the match, we were very soon in love with each other, and got married without loss of time. My story can be told in a couple of words. I must confess, gentlemen, in bringing up the subject of first love, I reckoned upon you, I won’t say old, but no longer young, bachelors. Can’t you enliven us with something, Vladimir Petrovitch?’

‘My first love, certainly, was not quite an ordinary one,’ responded, with some reluctance, Vladimir Petrovitch, a man of forty, with black hair turning grey.

‘Ah!’ said the master of the house and Sergei Nikolaevitch with one voice: ‘So much the better. . . . Tell us about it.’

His manuscript contained the following story:—

This counts toward my Russia book challenge.
Posted by Divers and Sundry at 4:00 AM