A Question of Belief 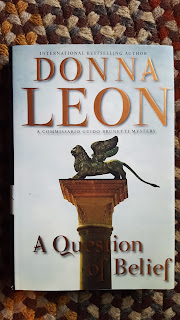 A Question of Belief (2010) is the 19th book in the Commissario Guido Brunetti mystery series by Donna Leon. I'm reading these books as I come across them in no particular order.

Donna Leon's prize-winning series starring the Venetian Commissario Guido Brunetti has been lauded by critics and cherished by fans around the world. Her shrewd, principled detective, who knows that justice and apprehension of a criminal aren't always the same thing, has led countless readers into a hidden Venice, a world unseen by the throngs of tourists who visit La Serenissima each year.

In Leon's latest novel, A Question of Belief, Venice is baking under a glaring sun, and Brunetti would like to escape the tourists. The hardworking Commissario's greatest wish is to go to the mountains with his family, where he can sleep under a down comforter and catch up on his reading of history. But before he can go on vacation, a folder containing court records lands on his desk, brought by an old friend. It appears that certain cases at the local court -hardly known as a model of efficiency- are being delayed to the benefit of one of the parties. This could be a creative new trick for corrupting the system, but if it is, what can Brunetti do about it?

Brunetti is also doing a favor for his colleague Inspector Lorenzo Vianello. The inspector's aunt has taken a strong interest in astrology and has been regularly withdrawing large amounts of cash from the bank. But she won't listen to her family, and Vianello doesn't know what to do.

And just when it looks like Brunetti will be able to get away for his well-earned rest, a shocking, violent crime forces him to shake off the heat and get down to work. A stellar addition to Leon's celebrated series, A Question of Belief is lush and atmospheric, packed with excellent characters, and builds to an explosive, unforgettable ending.


The book begins with this:

When Ispettore Vianello came into his office, Brunetti had all but exhausted the powers of will keeping him at his desk. He had read a report about gun trafficking in the Vaneto, a report that had made no mention of Venice; he had read another one suggesting the transfer of two new recruits to the Squadra Mobile before realizing his name was not on the list of people who should read it; and now he had read half of a ministerial announcement about changes in the regulations concerning early retirement. That is, he had read half, if that verb could be applied to the level of attention Brunetti had devoted to the reading of the entire document. The paper lay on his desk as he stared out his window, hoping someone would come in and pour a bucket of cold water on his head or that it would rain or that he would experience the Rapture and thus escape the trapped heat of his office and the general misery of August in Venice.


Euro Crime opens with this: "This latest in Donna Leon's much-admired series about Venetian Comissario Brunetti is well up to scratch." Italian-Mysteries.com has links to articles and interviews. The Independent concludes, "On the surface, this is another entry in a reliable series. But it also obliquely addresses the issues of legal gerrymandering, faith and corruption that bedevil Leon's adopted country."

This counts towards my TBR book challenge.

I've also read the following from this series: