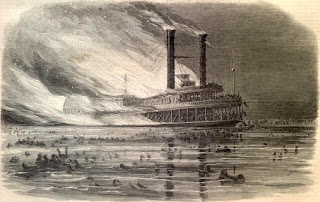 The explosion of the ship Sultana is the worst maritime disaster in U.S. history. On April 27, 1865, the overloaded ship (built for 376 passengers, but carrying 2,427) exploded and sank just north of Memphis. According to Wikipedia, the official count by the United States Customs Service of those who died is 1,800. Final estimates of survivors are about 550. Many of the dead were interred at the Memphis National Cemetery. Three victims of the wreck of the Sultana are interred at Elmwood Cemetery in Memphis.

There's a museum in Arkansas not far from here, and I'd planned to go before posting this. I haven't gone yet, but it's still on my list of close places I want to go.