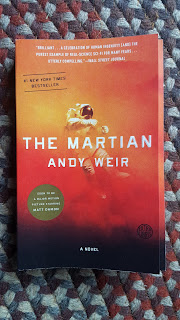 The Martian is a 2011 science fiction novel by Andy Weir. There is a 2015 film based on it which I haven't seen. This is a quick, easy read -a real page-turner. It may sound odd to call a book with this much hard science/technology in it "a quick, easy read", but the technical information is incorporated so well into the plot that it adds to the enjoyment even for someone like me who only has very basic science knowledge.

The story is of an astronaut who gets stranded alone on Mars. I'd call it suitable even for folks who don't care for science fiction, since it can be read as a Robinson Crusoe story. I'd even recommend it as a first novel for someone new to the genre.


A MISSION TO MARS, A FREAK
ACCIDENT, ONE MAN'S STRUGGLE
TO SURVIVE.
Six days ago astronaut Mark Watney became one of the first people to walk on Mars.

Now he's sure he'll be the first person to die there.

After a dust storm forces his crew to evacuate the planet while thinking him dead, Mark finds himself stranded on Mars’s surface, with no way to signal Earth that he’s alive. And even if he could get word out, his supplies would be gone years before a rescue could arrive.

Chances are, though, Mark won’t have time to starve to death. The damaged machinery, unforgiving environment, or plain old ‘human error’ are much more likely to kill him first.

Armed with nothing but his ingenuity, his engineering skills –and a gallows sense of humor that proves to be his greatest source of strength– Mark embarks on a dogged quest to stay alive. But will his resourcefulness be enough to overcome the impossible odds against him?

SF Reviews says, "I think we might well be looking — at long last — at a viable successor to the legacy of Arthur C. Clarke." Strange Horizons faults some of the science and language but says, "The Martian is a fun debut: chock full of tension, action, and some suitably believable situations."

Publishers Weekly concludes, "Deftly avoiding the problem of the Robinson Crusoe tale that bogs down in repetitious behavior, Weir uses Watney’s proactive nature and determination to survive to keep the story escalating to a riveting conclusion." Kirkus Reviews closes with this: "Sharp, funny and thrilling, with just the right amount of geekery."
Posted by Divers and Sundry at 4:00 AM