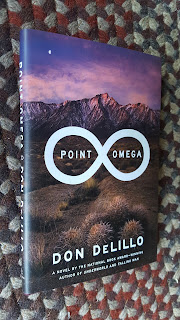 Point Omega is a 2010 novel by Don DeLillo. I'm not a big fan of the author, but he's well-respected and it's a short book.... I don't know why his books fail to attract me. This one is no different in that respect, but I'm not giving up on the author.


Don DeLillo has been "weirdly prophetic about twenty-first-century America" (The New York Times Book Review). In his earlier novels, he has written about conspiracy theory, the Cold War and global terrorism. Now, in Point Omega, he looks into the mind and heart of a "defense intellectual," one of the men involved in the management of the country's war machine.

Richard Elster was a scholar -an outsider- when he was called to a meeting with government war planners, asked to apply "ideas and principles to such matters as troop deployment and counterinsurgency."

We see Elster at the end of his service. He has retreated to the desert, "somewhere south of nowhere," in search of space and geologic time. There he is joined by a filmmaker, Jim Finley, intent on documenting his experience. Finley wants to persuade Elster to make a one-take film, Elster its single character -"Just a man and a wall."

Weeks later, Elster's daughter Jessica visits -an "otherworldly" woman from New York, who dramatically alters the dynamic of the story. The three of them talk, train their binoculars on the landscape and build an odd, tender intimacy, something like a family. Then a devastating event throws everything into question.

In this compact and powerful novel, it is finally a lingering human mystery that haunts the landscape of desert and mind.


It requires careful reading, but as with the man in the gallery, and as with every other aspect of this finely austere novel, the harder you look, the more you see.

New York Magazine says, "Point Omega, DeLillo’s new novel, fits right into this glacial aesthetic. You could even say it’s something of a breakthrough: It brings us, in just over 100 pages, as close to pure stasis as we’re ever likely to get." Slate has a lengthy review.
Posted by Divers and Sundry at 4:00 AM