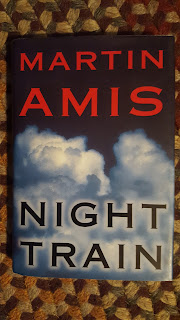 Night Train is a 1997 detective novel by Martin Amis. This is a quick read and interesting. The characters (how they interact and view each other) are fascinating.

A captivating mystery of betrayal and deception, Night Train is a groundbreaking departure from one of the world's most acclaimed novelist.

Detective Mike Hoolihan has seen it all. A fifteen-year veteran of the force, she's gone from walking a beat, to robbery, to homicide. But one case -this case- has gotten under her skin.

When Jennifer Rockwell, darling of the community and daughter of a respected career cop -now top brass- takes her own life, no one is prepared to believe it. Especially her father, Colonel Tom. Homicide Detective Mike Hoolihan, longtime colleague and friend of Colonel Tom, is ready to "put the case down." Suicide. Closed. Until Colonel Tom asks her to do the one thing any grieving father would ask: take a second look.

Not since his celebrated novel Money has Amis turned his focus on America to such remarkable effect. Fusing brilliant wordplay with all the elements of a classic whodunnit, Amis exposes a world where surfaces are suspect (no matter how perfect), where paranoia is justified (no matter how pervasive), and where power and pride are brought low by the hidden recesses of our humanity.

The NYT says, "This brilliant, painful short novel is, in fact, so profoundly inflected with grief that it achieves in the end a sort of melancholy grandeur." The Guardian says, "This is not a strikingly clever book, and it isn't funny. It reads like the work of a much younger man than his other novels. Unlike his other works, it asks you not to keep your distance, but to come close and suffer with the narrator."

The Atlantic has a review. Kirkus Reviews concludes its review with this: "Amis's hypnotic way with a phrase produces a collage asparkle with bits of broken glass--and perhaps the most jaundiced, knowing book ever written about ignorance. Quite an accomplishment."
Posted by Divers and Sundry at 4:00 AM