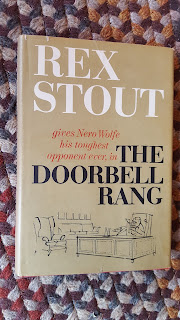 The Doorbell Rang is a 1965 Nero Wolfe detective mystery by Rex Stout. This is a fun book from a fun series.

The Doorbell Rang generated controversy when it was published, due largely to its unflattering portrayal of the FBI, its director and agents. It was published at a time when the public's attitude toward the FBI was turning critical, not long after Robert F. Kennedy and J. Edgar Hoover clashed and the Bureau was coming under fire for its investigations of Martin Luther King.

Researching his book Dangerous Dossiers: Exposing the Secret War Against America's Greatest Authors (1988), journalist Herbert Mitgang discovered that Stout had been under FBI surveillance since the beginning of his writing career. Most of the heavily censored pages he was allowed to obtain from Stout's FBI dossier concerned The Doorbell Rang:


About one hundred pages in Stout's file are devoted to the novel, the FBI's panicky response to it and the attempt to retaliate against the author for writing it. The FBI's internal memorandum for its special agents told them that "the bureau desires to contribute in no manner to the sales of this book by helping to make it the topic of publicity." Orders came from headquarters in Washington that any questions concerning the book should be forwarded to the Crime Records Division, thereby putting book and author in a criminal category.
An internal memorandum by Special Agent M.A. Jones (name surprisingly not censored) summarized the novel and went on to write a critique for the FBI's top command — a rare "literary" honor accorded to few books in its files ... Following the review came a series of recommendations — first, Stout was designated as a person "not to be contacted" without prior approval by FBI headquarters in Washington...

In April 1976, the Church Committee found that The Doorbell Rang is a reason Rex Stout's name was placed on the FBI's "not to contact list," which it cited as evidence of the FBI's political abuse of intelligence information.


from the dust jacket:

This is, in the considered opinion of his publishers, the finest detective story ever written by Rex Stout and therefore one of the very best ever written by anyone. As a new peak for the old master, it provides an occasion to celebrate an outstanding career, as well as a new challenge to the wits of his fans.

A very rich woman comes to Nero Wolfe and Archie Goodwin, claiming that she is being harassed by the FBI. She reports that agents are following her and members of her family, her wires are being tapped, and her privacy is being otherwise invaded. She demands that Wolfe help her to find relief and offers him the largest retainer he has ever seen.

Wolfe, with some hesitation, takes the case and quickly encounters a murder about which members of the FBI may know more than is apparent. He also soon finds himself in a direct encounter with FBI agents under highly questionable circumstances.

Never before has Rex Stout written a book more perfectly plotted or one with a denouement so skillfully arrived at.


Wikipedia has quotes from several reviews.
Posted by Divers and Sundry at 4:00 AM