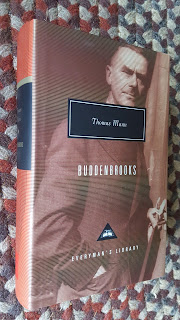 Buddenbrooks is a 1901 novel by German author Thomas Mann. It's the story of 4 generations of the Buddenbrooks family. Published when he was just 26 years old, this was his first novel and was specifically cited by the committee when he won the Nobel Prize for literature in 1929. It has had 4 screen adaptations. The book is quite long -the Everyman's Library edition is 731 pages. It can be read online only in German. Though the book itself is in the public domain I can't find a translation online. Seeking this book out is worth the time, and reading the book is an easy task. I found myself swept along, caught up in the characters' lives.

Buddenbrooks, first published in Germany in 1901, when Mann was only twenty-six, has become a classic of modern literature.

It is the story of four generations of a wealthy bourgeois family in northern Germany facing the advent of modernity; in an uncertain new world, the family’s bonds and traditions begin to disintegrate. As Mann charts the Buddenbrooks’ decline from prosperity to bankruptcy, from moral and psychic soundness to sickly piety, artistic decadence, and madness, he ushers the reader into a world of stunning vitality, pieced together from births and funerals, weddings and divorces, recipes, gossip, and earthy humor.

In its immensity of scope, richness of detail, and fullness of humanity, buddenbrooks surpasses all other modern family chronicles. With remarkable fidelity to the original German text, this superb translation emphasizes the magnificent scale of Mann’s achievement in this riveting, tragic novel.

A Common Reader concludes, "Undoubtedly a classic (who am I even to confirm such an obvious fact?), and worth every one of five stars, I would say that this is a novel all serious readers should read, and I am only surprised that its taken me so long to get to it."
Posted by Divers and Sundry at 4:00 AM