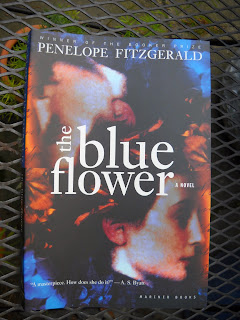 The Blue Flower is a 1995 novel by Penelope Fitzgerald. It was her last novel, published the year before her death at the age of 83. I think I must've just expected too much. I loved The Bookshop and Offshore, and critics heap copious praise on this one and say it is her masterpiece. Maybe. I guess I need to read more about her writing. To me, it was a collection of people I didn't care about doing things I wasn't particularly interested in. Sad. One out of 3 ain't bad odds, though, so I will still pick up her novels whenever I come across them. There's something about the way she writes that attracts me.

The Blue Flower is set in the age of Goethe, in the small towns and great universities of late-eighteenth-century Germany. It tells the true story of Friedrich von Hardenberg, a passionate, impetuous student of philosophy who will later gain fame as the Romantic poet Novalis. Fritz seeks his father’s permission to wed his “heart's heart,” his “spirit's guide” —a plain, simple child named Sophie von Kühn. It is an attachment that shocks his family and friends. Their brilliant young Fritz, betrothed to a twelve-year-old dullard? How can this be?

The irrationality of love, the transfiguration of the commonplace, the clarity of purpose that comes with knowing one’s own fate —these are the themes of this beguiling novel, themes treated with a mix of wit, grace, and mischievous humor unique to the art of Penelope Fitzgerald.

The NYT says, "Good as the other books are, "The Blue Flower" is better. It is a quite astonishing book, a masterpiece, as a number of British critics have already said...". The New York Review of Books calls it "her finest". The Independent calls it "her beautiful masterpiece". Publishers Weekly closes with this: "Fitzgerald has created an alternately biting and touching exploration of the nature of Romanticism -capital "R"". Kirkus Reviews concludes, "A historical novel that's touching, funny, unflinchingly tragic, and at the same time uncompromising in its accuracy, learning and detail: a book that brings its subject entirely alive, almost nothing seeming beyond its grasp."
Posted by Divers and Sundry at 4:00 AM