The Case of the Man Who Died Laughing 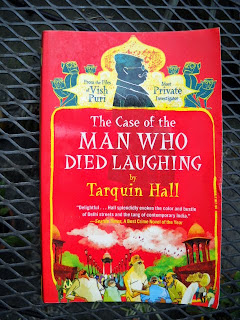 The Case of the Man Who Died Laughing by Tarquin Hall is the 2nd in a series of books about Vish Puri Most Private Investigator. I read the first one here. I just happened to come across these in a used book store, but I like them a lot and will actively seek out the others. The characters are fun and enjoyable to get to know, the plots are interesting; and I feel like I'm getting a taste of what some parts of India are really like. You can read the first chapter of this book here.


Early one morning, on the lawn of a grand boulevard in central Delhi, the Hindu goddess Kali appears and plunges a sword into the chest of a prominent Indian scientist, who dies in a fit of giggles. Vish Puri, India’s Most Private Investigator, master of disguise and lover of all things fried and spicy, doesn’t believe the murder is a supernatural occurrence and sets out to prove who really killed Dr. Suresh Jha. To get at the truth, he and his team of undercover operatives -Facecream, Tubelight, and Flush- travel from the slum where India’s hereditary magicians must be persuaded to reveal their secrets to the holy city of Haridwar on the Ganges. Stopping only to indulge his ample Punjabi appetite, Puri uncovers a network of spirituality, science, and sin unique in the annals of crime and soon finds that solving the case will require all of his earthly faculties.

Kirkus Reviews calls it "As tasty as Puri’s favorite aloo parantha." Euro Crime says, "The heat, colours, noise and also the humanity of a modern Indian city comes through very clearly." TarquinHall.com quotes several reviews, including this from the Daily Mail:


So brilliantly does Tarquin Hall capture the sights, smells, sounds and foibles of modern India, not to mention the nuances of English-Indian speech, that it is hard to believe he is not himself Indian. He also serves up fabulous descriptions of the Indian cuisine much favoured by Puri, a sort of Indian Poirot whose lunch will always come before his crime-solving.


Tarquin Hall has hurled himself into the maw of India with the same gumption that drove him to Afghanistan in his teens. The measure of his literary success here could be the Indian woman who overheard us discussing his who dunnits. She couldn't wait to tell him that he nailed the life and lingo of Northern India.

Vish Puri –“India’s Most Private Investigator”– is, for all his quirky habits (sneaking food when the wife’s not looking, spouting centuries-old history, nicknaming his most trusted colleagues, his occasional clashes with his Mummy), quite the entertaining star of his own series. Don’t ever compare him to Sherlock Holmes, but his eccentricities do make me think of the portly, equally idiosyncratic Hercules Poirot …