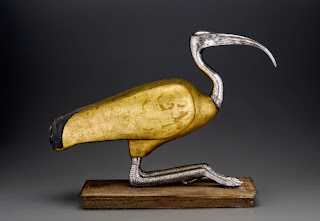 Soulful Creatures: Animal Mummies in Ancient Egypt is a current exhibit at the Memphis Brooks Museum of Art. It would've been more appropriate, I think, to have seen this back when it opened in October, but I'm just now getting around to it. The Brooks' web site says the exhibit is

the first major exhibition to focus on this fascinating and mysterious aspect of ancient Egyptian culture and religion. Drawn from the renowned collection of the Brooklyn Museum, the exhibition features 69 works of Egyptian art related to the ceremonial use of animal mummification and 30 animal mummies.

The mummies are varied animals, including ibis, cat, crocodile, shrew, hawk, snake... The mummies are examined using x-rays and CT scans so the wrappings aren't damaged during the process. It was interesting to read about the scans that showed no animal inside -just feathers, or dirt and stone- leading to speculation that some fraud was involved since these mummies were most often bought and offered as votive offerings to the gods. Wikipedia says:

The vast majority of Egyptian animal mummies were religious offerings. If an Egyptian sought a favor from a god, he would purchase or make an offering and place it at the appropriate temple of the god he wished to please. Before animal mummification became common, these offerings were usually bronze statues depicting the animals. However, eventually a cheaper alternative to bronze statues —animal mummies— became the most popular form of offering. ... The animals were raised on temple grounds, and then sold to pilgrims or regular citizens. The animals’ necks were often broken, an indication that their sole purpose in life was to be sacrificed as offerings. When visiting the temples, Egyptians of the general public would purchase these pre-mummified animals and offer them to the gods.

Trending News has information on the process of examining these mummies and has some photos, including this one of a snake coffin:


It's a fascinating look at this practice, and The Daughter and I enjoyed it.