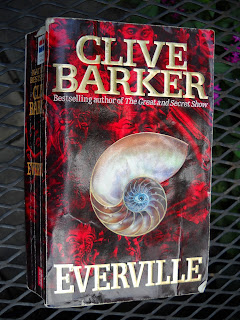 Everville is a 1994 horror novel by Clive Barker. A stand-alone novel, it's also 2nd in The Art Trilogy. I've read the 1st book, but the 3rd hasn't been written. I think it's safe to consider this a stand-alone. It makes perfect sense by itself. I like Barker's writing and enjoyed this. Reality & imagination combine to explore the depths of human emotion.

On the borderland between this world and the world of Quiddity, the sea of our dreams, sits Everville. For years it has lived in ignorance of the gleaming shore on which it lies. But its ignorance is not bliss. Opening the door between worlds, Clive Barker delivers his characters into the heart of the human mystery; into a place of revelation, where the forces which have shaped our past —and are ready to destroy our future— are at work.

Quotes that struck me:

...patience was easy if it was all you had; and it was.


"I think sometimes there's two different people in the world. The people who understand and the people who don't. And if they don't, it's no use trying to explain, 'cause it's just beyond them, and it always will be."


"What's the big deal about stories?" she said.
"You love them," he said, his gaze leaving her face and slipping down to the water. The glowing forms she'd seen rising from below were within a few fathjoms of the surface now. The water was beginning to simmer with their presence. "You do, don't you? he said.
"I suppose I do," she said.
That's what the connections are, Tesla."
"Stories?"
"Stories. And every life, however short, however meaningless it seems, is a leaf-"
"A leaf."
"Yes, a leaf." He looked up at her again, and waited, unspeaking, until she grasped the sense of what he was saying.
"On the story tree," she said. He smiled. "Lives are leaves on the story tree.

Kirkus Reviews has a scathingly negative review. Publishers Weekly says, " this novel confirms the author's position not only as one of horror's most potent and fertile minds but also as one of modern fiction's premier metaphysicians."