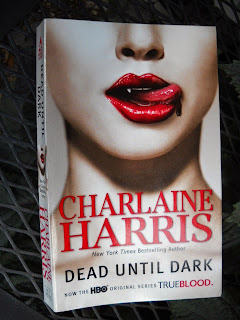 Dead Until Dark is the first in the Sookie Stackhouse Southern Vampire Mysteries series by Charlaine Harris. They were the inspiration for the True Blood HBO series, which I haven't seen. This book is fun. Nicely written, clever, with well-drawn characters and an interesting plot. Elvis has a small part to play towards the end. I already have the next 4 in the series and will read them.

Sookie Stackhouse is a small-time cocktail waitress in small-town Louisiana. She's quiet, keeps to herself, and doesn't get out much. Not because she's not pretty. She is. It's just that, well, Sookie has this sort of "disability." She can read minds. And that doesn't make her too dateable. And then along comes Bill. He's tall, dark, handsome -and Sookie can't hear a word he's thinking. He's exactly the type of guy she's been waiting for all her life...

But Bill has a disability of his own: He's a vampire with a bad reputation. He hangs with a seriously creepy crowd, all suspected of -big surprise- murder. And when one of Sookie's coworkers is killed, she fears she's next...


Sookie is a little delicate about public displays of affection. That has never bothered me -not sure why- and I found her squeamishness odd. It does solidify her character, though, as "virginal" in several ways. I found myself being a bit irritated at the numerous well-described sex scenes, and then I thought perhaps I was being delicate myself. Maybe. It did change the tone from horror/mystery to Romance, though, which made it less attractive to me. If the series keeps tending towards the Romance genre, I won't continue reading the books.

SF Site found it predictable. Tor's review calls it "one of the most popular urban fantasy series around". Love Vampires loves it and calls it "fast paced" and "a joy to read".
Posted by Divers and Sundry at 4:00 AM