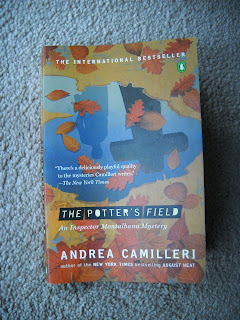 The Potter's Field is the 13th book in the Inspector Salvo Montalbano mystery series by Andrea Camilleri. I like this series. The characters are appealing and the plots are off-beat. I love the setting; I can picture myself out on his deck having just come in from an ocean swim. Ahhh... I love his house, and I've never even seen it. I haven't read all of them in the order they were written, but they are better read in that order because of the development of the characters and their relationships over time. These characters actually age and grow over the course of the series.

An unidentified corpse turns up near the Italian town of Vigata, a place known for its soil rich with potter's clay. Meanwhile, a woman files a missing persons report for the disappearance of her husband, a Colombian man with Sicilian origins who turns out to be related to a local mobster. Then Inspector Montalbano remembers the story from the Bible -Judas's betrayal, the act of remorse, and the money for the potter's field, where those of unknown or foreign origin are to be buried- annd slowly, through myriad betrayals, finds his way to the solution of the crime.

There were several things that particularly caught my eye as I read:

The first came fairly early when Montalbano was walking along with a few others in single file and was reminded of a painting: He muses, "Brueghel? Bosch? But this was hardly the moment for art." I wondered if The Blind Leading the Blind by Pieter Bruegel the Elder might be the painting he had in mind: 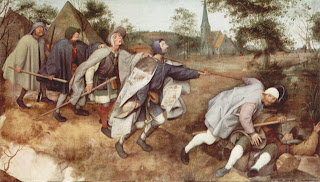 The second was a fun self-referential bit where Montalbano read a book by Andrea Camilleri.

Third, there was a passage that struck me, probably because of all I'm dealing with as primary care-giver for The Grandmother (my mother). I see my childhood and her attitude towards mothering in a whole new light now. Montalbano was driving through "the landscape of his youth" and reflects:


A line of Brecht came to mind: "Why should I love the windowsill from which I fell as a child?" But that line still doesn't quite say it, he thought. Because sometimes, when you're already almost old, the hated windowsill from which you fell as a little kid comes urgently back into your memory, and you would even go on a pilgrimage to see it again, if you could see it the way you did then, with the eyes of innocence.

Kirkus Reviews calls it "Especially recommended for series fans and mystery readers who enjoy the journey more than the solution." Eurocrime concludes its positive review with this:


The novel is more than a crime novel - though the plot is very clever and convoluted, because of the way Salvo decides to proceed with it - it is a meditation on getting older, on failing powers, and on the uncertain future we all face.