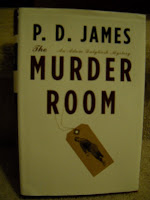 The Murder Room is the 12th book in the P.D. James Adam Dalgliesh mystery series. This is a series I have enjoyed. I still think of Roy Marsden as I read, but that's ok.

The Dupayne, a small private museum in London devoted to the interwar years 1919-1939, is in turmoil. The trustees -the three children of the museum founder, old Max Dupayne- are bitterly at odds over whether it should be closed. Then one of them is brutally murdered, and what seemed to be no more than a family dispute erupts into horror. For even as Commander Dalgliesh and his team investigate the first killing, a second corpse is discovered. Clearly, someone in the Dupayne is prepared to kill and kill again.

The case is fraught with danger and complications from the outset, not least because of the range of possible suspects -and victims. And still more sinister, the murders appear to echo the notorious crimes of the past featured in one of the musem's most popular galleries, the Murder Room.

For Dalgliesh, P.D. James's formidable detective, the search for the murderer poses an unexpected complication. After years of bachelorhood, he has embarked on a promising new relationship with Emma Lavenham -first introduced in Death in Holy Orders- which is at a critical stage. Yet his struggle to solve the Dupayne murders faces him with a frustrating dilemma: each new development distances him further from commitment to the woman he loves.

The Guardian has a review, as does The Independent. There is a reader guide here.

I have blog posts on these:

and An Unsuitable Job for a Woman, which features an appearance by Dalgliesh.
Posted by Divers and Sundry at 8:00 AM