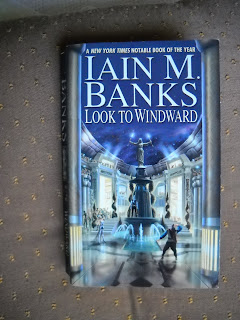 Look to Windward is a book in the Culture series by Iain M. Banks. I do love this series, and I can't tell you how much I wish I had just bought the books as they came out instead of dilly-dallying around looking for them in local used book stores. That's all water under the bridge now -although another expression might be better considering the disaster Tennesseans are undergoing. I'll be buying them as they come out from now on. I have also read Consider Phlebas, The Player of Games and Use of Weapons.

Eight hundred years after the most horrific battle of the Idiran war, light from its catastrophic, worlds-destroying detonations is about to reach to Masaq' Orbital, home to the far-flung Culture's most adventurous and decadent souls. There it will fall upon Masaq's 50 billion inhabitants, gathered to commemorate the deaths of the innocent and to reflect, if only for a moment, on what some call the Culture's own complicity in the terrible event.

Also journeying to Masaq' is Major Quilan, an emissary from the war-ravaged world of Chel. In the aftermath of the conflict that split his world apart, most believe he has come to Masaq' to bring home Chel's most brilliant star, the self-exiled celebrity Composer Ziller.

Ziller suspects Quilan has come to murder him, but the major's true assignment will have far greater consequences than the death of a mere political dissident. He is part of a conspiracy more ambitious than he can know -- a mission his superiors have buried so deeply in his mind that even he cannot remember it.

SFSite says "it is one of Banks' finest novels, mature, considered, horrifying and hilarious by turns" and "one of the most significant SF novels of the year." Infinity Plus calls it "a satisfying read but at the same time, a deeply frustrating novel." The Guardian and the New York Times each has a review.
Posted by Divers and Sundry at 1:00 PM