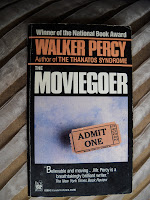 The Moviegoer is the first novel written by Southern author Walker Percy. It won the 1962 National Book Award. Time lists it as one of the all time great novels.

Binx Bolling is a small-time stockbroker who lives quietly in suburban New Orleans, pursuing an interest in the movies, affairs with his secretaries, and living out his days. But soon he finds himself on a "search" for something more important, something that will measure and mark and hold his life forever against the passage of time. And one fateful Mardi Gras week, he finds it in a way, and with a woman, he would never have expected....

The Southern Literary Review has an article. CatholicFiction.net closes its review by saying,

The Moviegoer deserves its status as a modern classic because Percy does not spare “modernity.” Nearly fifty years after the publication of this book, the names of the movies and movie stars have changed, but Binx Bolling’s spiritual despair is all too familiar.

Nothing is stated; everything is implied. The reader gets fragments of meaning and occasional glimpses of deep-rooted causes. Yet so expertly are these fragments fitted together and these glimpses sustained that Binx and Kate grow steadily in character throughout the book.

Posted by Divers and Sundry at 4:15 PM