Today is the anniversary of the death in 1980 of Len Lye. I discovered this artist when I participated in the Short Film Blogathon.

FilmReference.com has an article on Len Lye. ScreenOnline has a short bio and wonderful short studies of individual films. The Australian Center for the Moving Image has an online tour of their exhibition.

There is an overview of his film work at Senses of Cinema, which ends with this:

A cultural outsider with the determination, intuition and insight to move within several artistic and industrial circles simultaneously, Lye's films opened up space for an art of documentary and, alternately, the possibility of an accessible avant-garde. By inventing new ways of making films without a camera, expert knowledge or extensive equipment, he initiated a field of artisanal, self-sufficient screen practice that continues to grow and thrive. Importantly, his innovative modernist films reveal that experimental cinema can be a fun, ecstatic and pleasurable experience, self-rendering a cinema of limited means that is no less valuable.

Senses of Cinema also has an article on a talk Lye gave called The Absolute Truth of the Happiness Acid:

Happiness was important for Lye – he was essentially a happy person, and he worried that personal and international problems prevented others from sharing his attitude. When he developed his political/philosophical concept of 'Individual Happiness Now' in 1941 at the height of the war, he was hopeful that he could share 'the best in human experience' with others.

Lye also created kinetic sculptures and other works of art, some of which are pictured at The Govett-Brewster Art Gallery, which "is home to the archives and studio collection of the Len Lye Foundation". Here is a photo of the Wind Wand taken from Get Down's Flickr page: 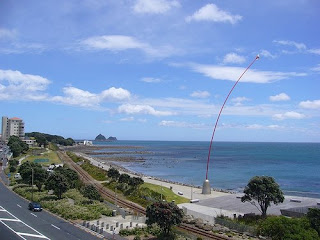 This is an excerpt from a documentary:

It includes Len Lye discussing and demonstrating his kinetic scultures.

I found some of his films available online.

Posted by Divers and Sundry at 6:00 AM