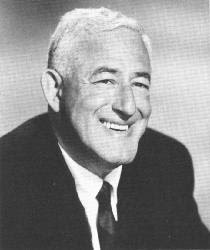 Today is the anniversary of the death in 1977 of film director William Castle. He's best known for his "gimmicky" promotions, for example, taking out insurance policies against the possibility of someone dying of fright during his film Macabre. He has a Facebook page. The Guardian calls him "the godfather of interactive cinema." The only one of his films that I have a blog post on is Mr. Sardonicus. I haven't seen any of his other works, but I'm sure I'll get around to them.
Posted by Divers and Sundry at 7:45 PM