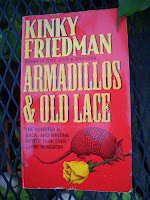 A while back I came across 3 Kinky Friedman books in my favorite used book store, bought them all and read Elvis, Jesus & Coca-Cola. I liked that one but somehow am just now getting around to the next one. Armadillos & Old Lace, like the first one, features a character named Kinky Friedman. Also like the first one, this book just cries to be read aloud. I follow family members around quoting extensive passages, while they say, "Oh, yes, I remember the last time you read something by him." I laugh aloud while I'm reading and then hope someone comments on my laughter to give me an excuse to read that section to them. Delightful books, that's what they are. If you're not as lucky at the used book stores as I am, there's always Amazon.com, where this book is readily available.

Kinky Friedman is living proof that you can be a Texan, a New Yorker, a Jewish country and western singer and an amateur detective at the same time. But when New York City gets a little too full of murder and mayhem to suit him, Kinky heads for the fresh air of the Lone Star State - filtered of course, through his ever-present cigar. But something is rotten in the state of Texas too, and Kerrville's justice of the peace asks the Kinkster for his help. Four old ladies have died in the past few months, and though there's no apparent link, Judge Pat Knox is sure there's a connection. Before the case ends, Kinky will meet up with a rose growing survivalist, a swarm of angry bees, a swarm of eight year old buckaroos at his father's ranch and summer camp and, if he's not careful he may just meet up with his own untimely end.

what's best about "Armadillos" is Friedman's own struggle to make sense of the world around him, an effort that is sometimes boisterous and buffoonish, sometimes poignant and endearing. He's a cross between Holden Caulfield and Woody Allen, a Southern-fried Jew with an identity crisis as big as Texas and a heart to match.

Friedman has an online a cigar store and an associated official web site.
Posted by Divers and Sundry at 1:00 PM