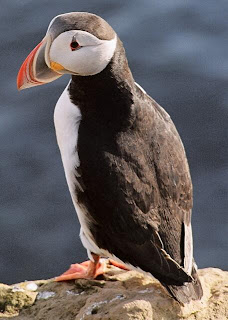 Project Puffin brought the puffins back to Maine. According to a Smithsonian article:

Though puffins endured elsewhere in their historic range—the North Atlantic coasts of Canada, Greenland, Iceland and Britain—by the 1960s the puffin was all but forgotten in Maine.
...
“After 100 years of absence and nine years of working toward this goal,” Kress wrote in the [1981] island logbook that evening, “puffins are again nesting at Eastern Egg Rock—a Fourth of July celebration I’ll never forget.”

Project Puffin has a web page here, which includes information on the 5/28 Birdathon.
Posted by Divers and Sundry at 9:30 PM