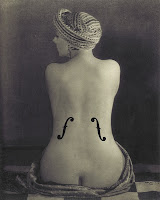 Today is the anniversary of the death in 1976 of artist and avant-garde filmmaker Man Ray. Artsy.net has resources on him, including a short biography and photos of his works (including works for sale). There is an official Man Ray site. PBS has a page devoted to him as part of their American Masters series. The Getty Museum has a short biography and pictures of some of Ray's paintings. The Tate Museum's exhibition is called Duchamp Man Ray Picabis: The Moment Art Changed Forever.

He did some film work with Marcel Duchamp and Fernand Leger. Ubu.com has some information and videos. FilmReference.com has extensive references and an article which closes by saying


to overlook the impact of May Ray on the cinema is to ignore the influence of one of the early pioneers of cinematic art. It was Man Ray, and many of his Dada and Surrealist contemporaries who first drew attention to a great many of the cinematic techniques widely used today. For this, and for the fascinating efforts at producing a non-narrative cinema, Man Ray's films remain crucial to any understanding of the development of film.

The House of Mirth and Movies has a post that confesses to confusion on how to comment on experimental film, saying


it rarely holds much emotional value, and I feel a lot of it does not offer the same kind of insight into form or theme as in other mediums. This is above middle tier for me in this regard

The Mysteries of the Chateau of Dice (1929) can be viewed online here.

This is a documentary on his life and work:

and here is another:

The picture at the top of the post is Ray's Le Violon d'Ingres.
Posted by Divers and Sundry at 10:40 AM