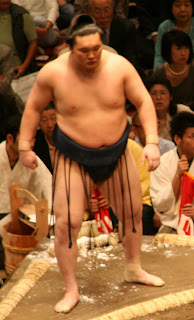 Hakuho Sho, a Mongolian wrestler, has won another tournament. That Wikipedia article linked to his name (where I got the photo above) says, "Both Hakuhō and Ama finished with a 13-2 record and an eventual play-off was won by Hakuhō, handing him 4th yusho of the season."

Hakuho earned his ninth Emperor's Cup the hard way, beating sekiwake Ama in a an epic championship playoff Sunday and crowning a great year for the yokozuna.

The Japan Times opens with this:

Wrapping up the final tournament of the year with a bang, Hakuho expended every ounce of energy as he sent the sekiwake sprawling to the dirt with an unstoppable overarm technique at Fukuoka Kokusai Center to win his ninth career Emperor's Cup.

Posted by Divers and Sundry at 5:59 AM