We went to the zoo, zoo, zoo 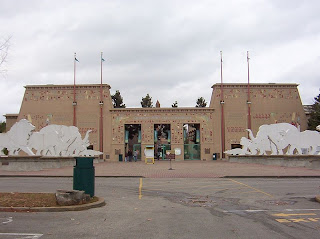 Today Mother, The Younger Son and I went to the zoo. Mother had never seen the China exhibit, though we had seen pandas at this zoo before many years ago, and she had not seen the Northwest Passage exhibit where the Polar Bears are. Today was "free day" during which there's no admission charge between 2 and 5, and I have never seen the zoo so crowded. The cars were lined up all the way out to Poplar Avenue, and the parking lots were full so cars were being lined up in the adjoining field. I guess we've just never come to a free day during the summer. 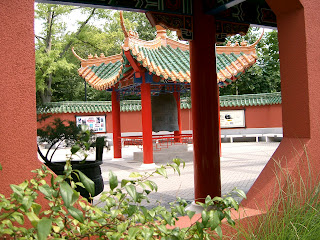 The China exhibit houses the pandas which were asleep, as they most often are when we go. The zoo has a PandaCam here. There is video of one of the pandas eating here. The Younger Son's favorite animals at the zoo are the otters. He was very disappointed when the China exhibit opened and they moved the otters there, because it requires a separate $3 per person entry fee to enter that section. [see comment below: I think this is included in regular admission and only has a separate charge on "free" days.] We talked to a zoo employee today when we were unable to locate the otters after searching their area for a while. She was very nice and called "Lucy" for us. She located Lucy's paw and tail sticking out from under a piece of wood where she was sleeping. It seems there's only the one otter left at the zoo now. The wikipedia article on this Asian Small-Clawed Otter, the smallest of the otters, has pictures. Here is video of the Memphis Zoo otters when there were more than one in this exhibit. The photo above is of the Bell Pavilion at the entrance to the exhibit. 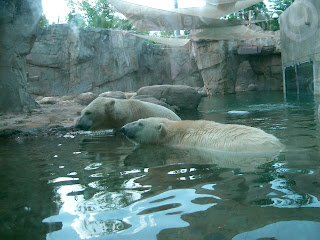 Mother was disappointed to find out that most of the bears that used to be at the zoo are gone -no Sun Bears, no Spectacled Bears, no Grizzlies.... Only the Polar Bears and Black Bears in the Northwest Passage exhibit remain. I love the bears and still miss them. I don't understand why the zoo got rid of them. The polar bears do have a much better home now. The picture above is one I took today. The zoo has a PolarBearCam here. There is video of one of the polar bears swimming here. The sea lions are in this section also, and there is a video of them here.

The Butterfly exhibit is beautiful -lots of butterflies and the promise of more as the season progresses. The flowers are a treat. The adjacent spider exhibit is closed right now. We also saw the giraffes, zebras, elephants, rhino, Primate Canyon, the lions, but we didn't see everything. After all, we were only there a little over 3 hours.

7/2/2008:
I was sure Mother would be tired and sore after walking so much at the zoo, but she was not. When I talked to her today she said the trip had done her good. Everything went smoothly even though it was so crowded, and it was a treat for her to see all the changes that had been made in just the few years since she was last there. She was most impressed by all the space and water available to the polar bears and the viewing area for that exhibit, including seating inside.

8/12/2008:
The Memphis Business Journal reports that the Memphis Zoo has been ranked "the best zoo in the United States by TripAdvisor editors and based on traveler popularity".
Posted by Divers and Sundry at 9:46 PM