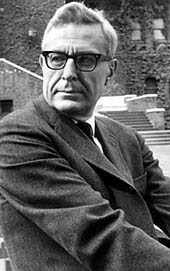 "We loved the earth but could not stay"
Today is the anniversary of the death in 1977 of ecologist and author Loren Eiseley. He has an official website here, where there are some high school-level curriculum guides, a few reviews of his work and copies of the society's newsletter. There are excerpts from his works here. One of Salon.com's bloggers has some of Eiseley's poems and the oft-quoted but seldom-cited starfish story. There is an article on his spirituality which says

Loren Eiseley is very much in the tradition of Henry David Thoreau. He takes the circumstances of whatever “business’’ he is about as the occasion for new questioning, new searching for some sign, some glimpse into the meaning of the unknown that confronts him at every center of existence. For many scientifically oriented individuals, the unknown is a “not-yet” at the outer edge of the known. For reflective thinkers like Eiseley, who understand their science as experience, the unknown is always encountered in the midst of the known. That is to say, the more one is aware of one’s own involvement in a scientific enterprise, the more one understands it as participation in a mystery, rather than as a conquest of exterior and objective territory.

There is an essay on Eiseley here. LiteratureMap.com suggests that people who enjoy reading Eiseley will also like John Muir.

The photo at the top of the page is from the U.S. EPA site.
Posted by Divers and Sundry at 8:39 PM