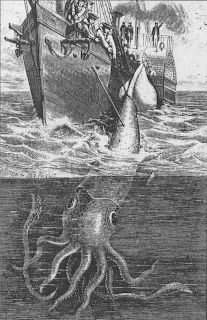 You can watch the dissection here (HT: Pharyngula), where they explain that

The squid which was accidentally caught in a fishing trawl off western Victoria, weighs around 245 kg, making it the largest giant squid that Australian researchers have encountered. It is estimated that, intact, the animal would have been over 12 metres long.

There's more information on the Giant Squid at Wikipedia. There is an informative site here on the animals. National Geographic has a page. The Smithsonian has an exhibit. There is a video report of a sighting of a live giant squid at youtube.

Posted by Divers and Sundry at 6:14 AM