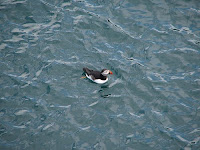 The dramatic decline on the Farnes along with that found earlier this year on the Isle of May leaves no doubt that the North Sea has lost a substantial proportion of its puffins.

One of Britain's best-known and most vivid birds has suffered an abrupt and unexplained decline in numbers on its island strongholds in the North Sea.

After uninterrupted population increases for 40 years, puffin colonies on the Farne Islands off Northumberland and the Isle of May in the Firth of Forth have fallen by a third in five years.

The BBC (who also has a 90-second video at youtube), the Daily Mail, the Chronicle Live and Times Online also reported the story.