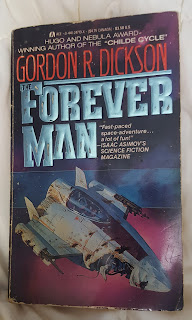 The Forever Man is a science fiction novel by Gordon R. Dickson, who won numerous awards and who was inducted into the Science Fiction Hall of Fame the year before his death. Here's more proof that books don't have to be new to be fun to read. Older books (and by that, I mean that this book was published in the 1980s) are usually readily available pretty cheap online used or in local used book stores if you're lucky enough to live in a place that has a used book store.

MIND AND MACHINE
An ancient starship is found adrift in space, damaged by alien Laagi warships. The voice of the pilot still survives -a mind merged with the ship itself.

Now, Earth's scientists attempt to duplicate the feat. Pilot John Wander has been chosen for the dangerous mission. His spirit transferred from his body to his own ship. Wander must make peace with the Laagi...

Or lose his ship and his mind.