La Haine (Hate) is a 1995 French film (this one I found online here with English subtitles, which is a huge help for me) in black and white. The most famous quote from the film, "Hatred breeds hatred" shows how little has changed.


Here's a screenshot with a drink in it for the T Stands for Tuesday blogger gathering: 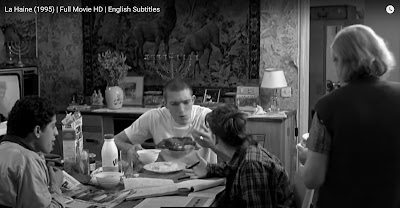 
“Hate” tells the story of three young men--an Arab, an African and a Jew--who spend an aimless day in a sterile Paris suburb, as social turmoil swirls around them and they eventually get into a confrontation with the police.

If France is the man falling off the building, they are the sidewalk.

Rotten Tomatoes has a critics consensus score of 100%.

This is a 6-minute reflection on what the film says about violence in our society: