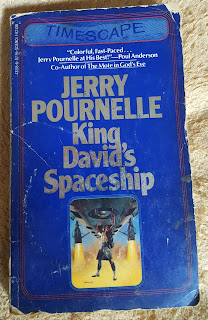 I have a local friend whose husband has recently died. I've been blessed by her thinking of me when she decided to give me first choice of his science fiction paperbacks. These tend towards adventure or military or political in tone, and many are authors I haven't read in a while. King David's Spaceship by Jerry Pournelle is a 1980 reworking in novel form of a three-part serial published in late 1971-early 1972.
from the back of the book:

After years of civil war, the superior weaponry of the CoDominium empire has brought peace and unity to the Samualans - at the cost of their liberty.

Their last bid for freedom is to create a space program proving themselves worthy of statehood. But the knowledge to build a starship is extinct.

Colonel Nathan MacKinnie, soldier of fortune, leads a daring raid to steal these secrets from the primitive planet of Makassar, where the key to space technology is jealously guarded by Temple priests.

Valiantly leading his fierce commandos, MacKinnie battles across the universe, trying to wrest away from Makassar the knowledge left there by the first settlers who traversed the void of space from a planet called Old Earth.

To live in peace they must fight for ancient secrets. To gain their freedom they must build ... KING DAVID'S SPACESHIP

Pournelle died in 2017 at the age of 84, having won many awards for his work. His political views are described as "paleoconservative," and he described his own views as "somewhere to the right of Genghis Khan".
Posted by Divers and Sundry at 4:00 AM